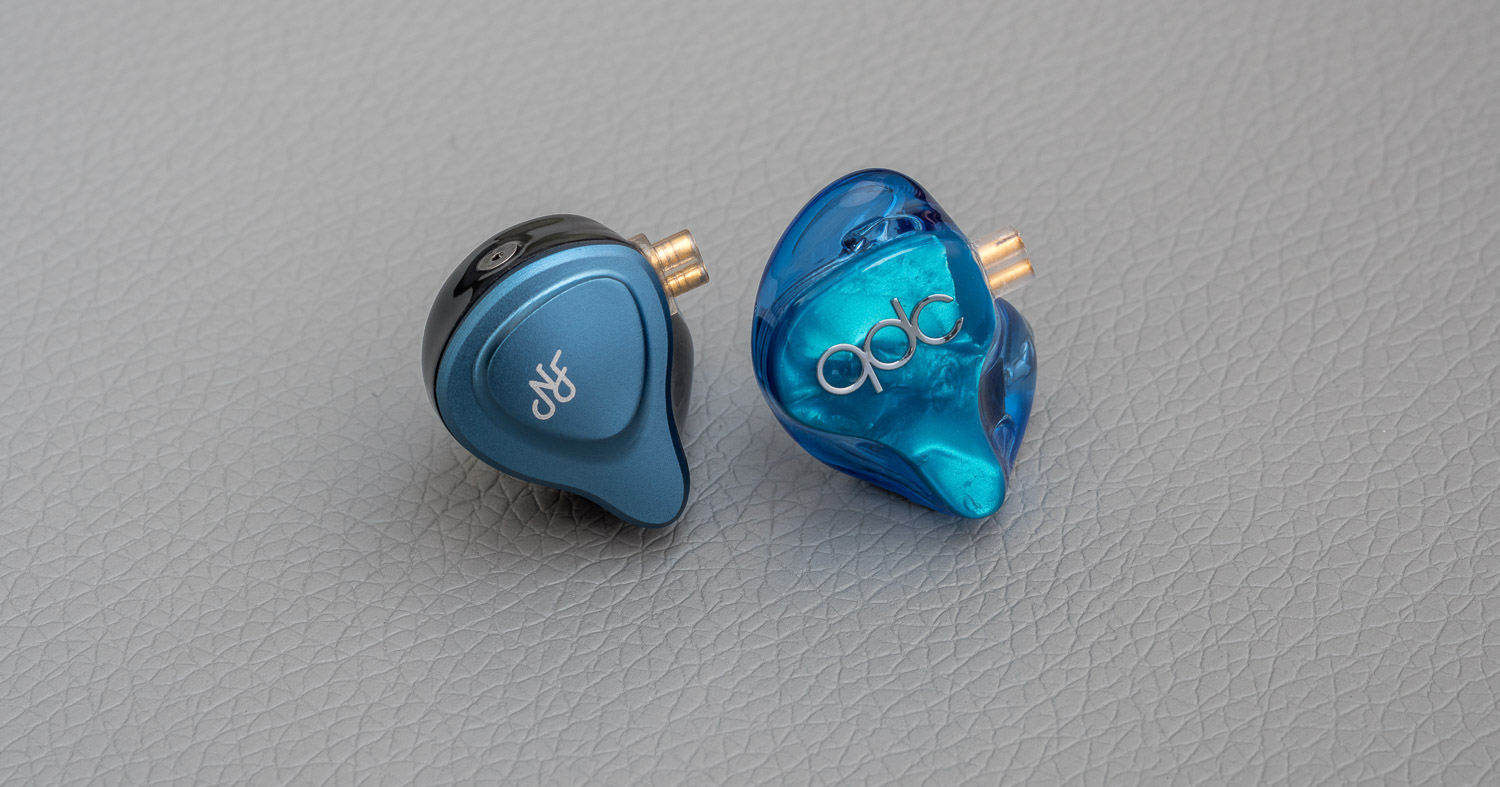 I had planned to write a normal review on the NF Audio NA1, but I also remembered that I never really mentioned the qdc Neptune anywhere. So I thought this would be a great chance to cover them both. My focus is on the NA1, though, I want to highlight differences of the qdc Neptune versus NF Audio NA1.

Around one and a half years ago, I treated myself to the qdc Neptune universal IEM. I never actually wrote anything about it as this was a purely self-motivated purchase. It is an IEM that I still proudly wear when stepping outside. Equipped with a single BA, I like to compare its technical performance with the likes of Etymotic. The MSRP is around 200 USD.

I already introduced the NF Audio NA1 in my last post but have now spent considerably more time with it. I am mostly impressed with the single dynamic driver and if the IEM wouldn’t have but a minor quirk, I would consider the NA1 to be something incredibly special. But I will get to that later. The MSRP is around 150 USD.

There is a reason why I compare these two IEMs. They have quite a lot in common.

qdc and NF Audio both show off their roots in pro-audio in regards to their universal IEM design. The Neptune is actually extremely close to a custom-fit monitor as it also uses the same acrylic material for the housing. For all I know, the qdc could actually be hand-made like their premium models. While the main body of the NA1 is also made of plastic, it has a more industrial design. NF Audio uses a metal faceplate (that are available in different colors), added two vents and a nozzle made from metal. As much as I like the metal mesh to protect the nozzle from dirt, I am slightly bothered by the nozzle length. The Neptune sits flush to my ear and I just can’t easily get that tight fit with the NA1. Fortunately, neither model has any flaws in build quality at all.

It seems that both companies share the same supplier for twisted cables. These are really extremely similar in haptic touch and looks with the difference of being silver-plated with the NA1. The Neptune ships with a headset-cable, though, while the NA1 is for unbalanced stereo only. It looks as if both use the same 2-Pin connection with a protruding design, which is the best and most reliable on the market, from my experience. However, I wasn’t able to install NF Audio’s cable on the qdc – I think qdc might actually be using 0.75mm compared to 0.78mm pins.

The highly potential dynamic driver of the NA1 has two vents that also allow for surrounding noise to get in. It is not a monitor I would use on stage as the isolation isn’t high enough for me. However, I really miss some kind of pressure relief system with the Neptune. These sight tight but also trap the air. It can be uncomfortable if you are not used to it or if you move your jaw a lot. The isolation isn’t all that great either.

I need to mention this first, but the NA1 is an absolutely formidable IEM for the price. But there is one issue that might be a deal-breaker for many: the transition from the upper midrange into the higher frequencies is emphasized. No, there is no annoying sibilance or too much harshness which would potentially cause physical pain, yet the boosted information from 4-5 kHz is very noticeable. This goes along with anything but a shy treble. The correct description would be “resolving”, but probably it will be considered as hot with a bright tilt by some users.

Whereas a boosted bass often drowns out all the details of the music, it is almost the other way around with the NA1. The microdetails, small cues and harmonics push the tight bass into the background. We could argue in detail whether we are closer to a bright tuning or the truth of a studio-reference, but in this price category it would probably be considered all the same by most users. Considering most IEMs in this price range feature excessive amounts of bass, the NA1 might be perceived as having quite forward treble instead.

You can jump to the compensated frequency graph in which I help to visualize the treble attenuation.

That does not mean that the NA1 won’t let you enjoy the music; it’s just that I have to admit that I needed some time to adjust to it so that I could re-find the musicality with some tracks. I actually appreciate this tuning with very fast music and I imagine it vibes especially well with the Power Metal genre. But best not to expect something that will make you tip your toes right away. Where the tuning shines is with multi-layered Jazz tracks that really unfold the different components. But the NA1 will ask the user to focus compared to a consumer IEM that would just thump along the beat.

Short Comparison to the AZLA Horizon

I rewarded the AZLA Horizon with a FOTM title. These IEMs can also be borderline fatiguing as they have a Harman-tendency of shouting in the midrange. However, the AZLA have better isolation and the voices sound a bit more vivid which allows them to be slightly better positioned in front of the treble. It’s a nuance that can make or break the deal. The Horizon also counter the treble with a stronger (sub-)bass, which makes these more accessible.

The emphasis on harmonics does also not fare too well with any flaws in the audio information. This could be hiss from an amp, clipping, distortion or simply badly produced tracks. If you think it’s not that bad, let me tell you that it allows me to hear hiss from an Opus #1 or a Mojo. Nothing will be forgiven. Though when playing music the NA1 does not reach the annoyance of a sibilant peak, the lack of headroom can cause fatigue after a while.

Now this is an unconventional review. I stepped right in and started discussing the NA1’s weakness first. Because apart from that, I am thoroughly impressed. The speed of the single dynamic driver is simply delicious. The tightness of the bass can make any drummer drool and the body feels just right with most recordings. The midrange is accurate and once one gets past the slight hollowness, voices sound realistic too. The treble is snappy and fast in decay. It actually all comes together when you have a perfect seal and no surrounding that would drown out the lows. Under these conditions, the NA1 is formidable. But when I step outside, I personally either need better isolation or less treble emphasis.

The perception of the Neptune’s tonality might differ quite a bit from review to review. Some people consider it to be rather warm and bassy while others describe it as neutral. In fact, it is rather warm. It just happens that added impedance to the signal path (for example a higher output impedance of your amp) pulls the qdc quite close to the Etymotic Studio range. This allows much room for tuning but can also be an annoyance as it causes issues if you just want to plug it in and play music. I found the sweet spot to be around 6 ohms using the stock cable, with which the Neptune sounds mostly uncolored yet enjoyable. There’s merely a narrow treble dip around 7 kHz that softens clarity and transparency.

Limitations of a Single BA

Just like with the Etymotic range of IEMs, a single BA can be limiting to trained ears. This is also the case with the Neptune. By default, the bass is boosted which makes it sound lush and enjoyable with good warmth from the upper bass and lower midrange. However, the lowest octave lacks authority and mid-bass can sound a tad overly-textured, which could potentially be the audible effect of distortion. The midrange and treble details also have this somewhat brittle sound that many Etymotic users enjoy. I also prefer it over slight mud and blur, but I do think that the Neptune makes some audio to appear to have more artifacts than it actually has.

I really like both IEMs and I can imagine sticking to either for most of my usage. But comparing them in detail, I prefer the technicalities of NF Audio’s offering. They offer a wider soundstage, more details and they have the potential to unfold a greater experience with high dynamic audio. The bass reaches deeper and it sounds tighter without bleeding into the midrange.

The Neptune sound fuller by default and can be less offensive. However, they have the issue of a very non-linear impedance curve that makes it really difficult to get them to sound just right. So even though they look a little bit better and offer the prettier case, I found myself to grab the NA1 more often.