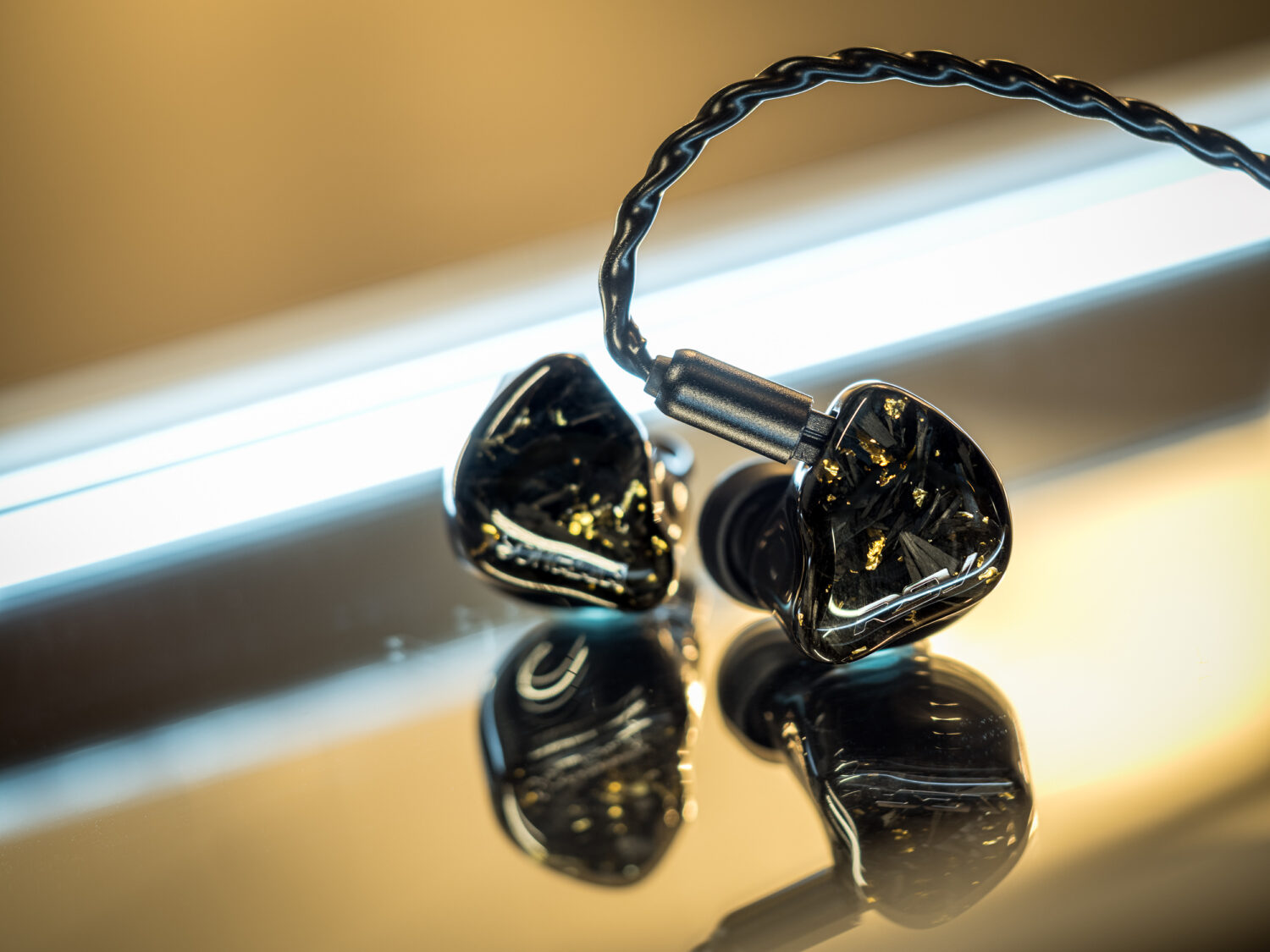 As announced in the Softears introduction post, here are the measurements of the Softears RSV, aka Reference Sound 5.

Spoiler alert: I think this is hands down the best-tuned IEM I have ever come across! You can thank me for finding this jewel.

Okay, let’s take things slow. First off, here is the frequency response as measured on an IEC 60318-4.

You will notice that I included a second graph, traced as a dotted line in green. This is my personal target that I received after equalizing multiple IEM and then measuring them. I made a blog post about it a year ago called Constructing an Audiophile IEM Reference Target. The Softears RSV matches that target with a variance of +-1.7 dB from 120 Hz to 10 kHz. Wow… now let that sink in for a minute.

“But Klaus, isn’t this related to your personal HRTF?” Yes, that is why I shared a “generalized target” at the same time. So behold, now comes the SPL curve of the Softears RSV using SpinFit CP500, overlaid on the generalized target. If you can read graphs or have experience in measuring IEM, your jaw should drop right about now. At least mine did.

The SpinFit are known to shape the treble and resonances. Sometimes it works, sometimes it doesn’t. But in this case, it is a dream come true!

Of course, different reviewers have different targets. You may say you prefer Crin’s target, for example. Obviously, I don’t. I think my method is the best way to create a personal reference target and I invite everyone to do the same: (i) listen (ii) equalize (iii) measure (iv) average multiple IEM. That also reduces the distortion of your measurement setup.

I always listen to an IEM before I measure it. I also take notes and do a sine sweep. In this case, I could not find any flaws at all. The RSV sounds as excellent as it measures. Yes, it’s really that good!

This is not an IEM that will strike you with a wow-factor. In the contrary, it will sound basically transparent with no characteristic at all. If you want to hear things that aren’t supposed to be heard that way, you can find some highly experimental self-proclaimed “high-end” manufacturers that might suit you. I rarely discuss those on here as bashing them is a waste of everyone’s time.

The name “Reference Sound” has rarely been more suitable for an IEM. If you want to hear the subtle signature of a producer, hear the difference between different mixes of the same album, this is the IEM for you! It belongs into a studio or in the ears of an audiophile who truly appreciates what high-fidelity means. Does it mean that all your music will sound better than ever before? Possibly not. That is highly dependent on the recording, mixing and production.

You will notice that in the bass the RSV exceeds my target in quantity. Like I mentioned when I shared my target, I was more susceptible to the bass quantity a few years ago. I think it’s not just the age (I’m still kind of in my mid-30s), but also the level of stress or adrenaline that shapes the perception of bass quantity. YMMV.

Anyway, the all-BA setup is closer to an infinite baffle speaker than one with bass ports, which is why many prefer dynamic drivers over BA for the low-end. The tuning of the RSV compensates this and has great punch and rumble without bleeding into the midrange. But I will save some subjective findings for the review.

Every time I share measurements, I give out a fair warning and say to trust your ears first! There’s a lot you can mess up with an IEM that is not easy to read from the frequency response – let alone that the measurements can be subject to a multitude of errors.

So the RSV has one more ace up its sleeve that I haven’t shared yet. It features linear phase! Does it matter? Can you hear it? Jerry Harvey makes a big deal out of his FreqPhase, so there’s that. I have experienced that it makes a notable difference with speakers. The improvement of imaging and soundstage is remarkable. Without A/B-comparison of the same setup, this is possible more difficult to tell or clearly attribute to phase. At the very least, a messed-up phase would also show in the SPL curve. Unfortunately, I have not managed to set up my system to measure acoustical phase accurately. I hope I can manage to do so before the full review.

Finally, distortion. I measured the total harmonic distortion (THD) including up to the ninth harmonic at 90dB@1kHz. (My actual listening volume is ~10dB lower.) The RSV is consistently below 0.3% from 35 Hz and higher. This is not reference-grade (like the final A8000 or Softears Turii), but far below the audible threshold. Actually, this is quite low for BA drivers. Interestingly, the distortion drops heavily in the treble and is basically nonexistent at down to 0.017%. (It’s not like you would hear the harmonics of 8 kHz anyway.)

Without much ado, I will drop some comparisons below. I’m using the curve with the default silicone tips as that’s how I measure most IEM unless I feature it in an article. Keep in mind that the treble extension can be improved significantly as shown earlier.

Apples and oranges? Fans say the FXD1 is among the most neutral dynamic drivers. The graph shown here uses the green filters which damp the most. I bought this IEM from Drop because people were praising it to the heavens and I love the design. But the midrange is far too shouty and shrill for my taste. I guess that’s because of the rise up to 4 kHz instead of dropping after 3 kHz. Alas, I have never spent my time on a review for the JVC. Anyway, best thing about the FXD1 is definitely the bass, which is quite in line with Softears’ tuning.

The Gemini and Anole VX from qdc didn’t become popular until quite after their release. By now, they show up in some influential best of lists. Shown here as a dotted line is Gemini’s activated bass boost. Please note, my Gemini is the custom-fit version and CIEM usually doesn’t measure similar to universals. However, I made sure to consider this.

Another 5BA vs 5 BA comparison. The SD5 has a great w-shape balance and obviously isn’t going for true reference tuning – that’s for InEar’s ProPhile 8.

You know I am a fan of the ProPhile 8! But I know many users find the treble a bit too hot. Though this helps with the resolution and fine details, the RSV is actually an easier recommendation. This will be less of an issue here while still preserving transparency.