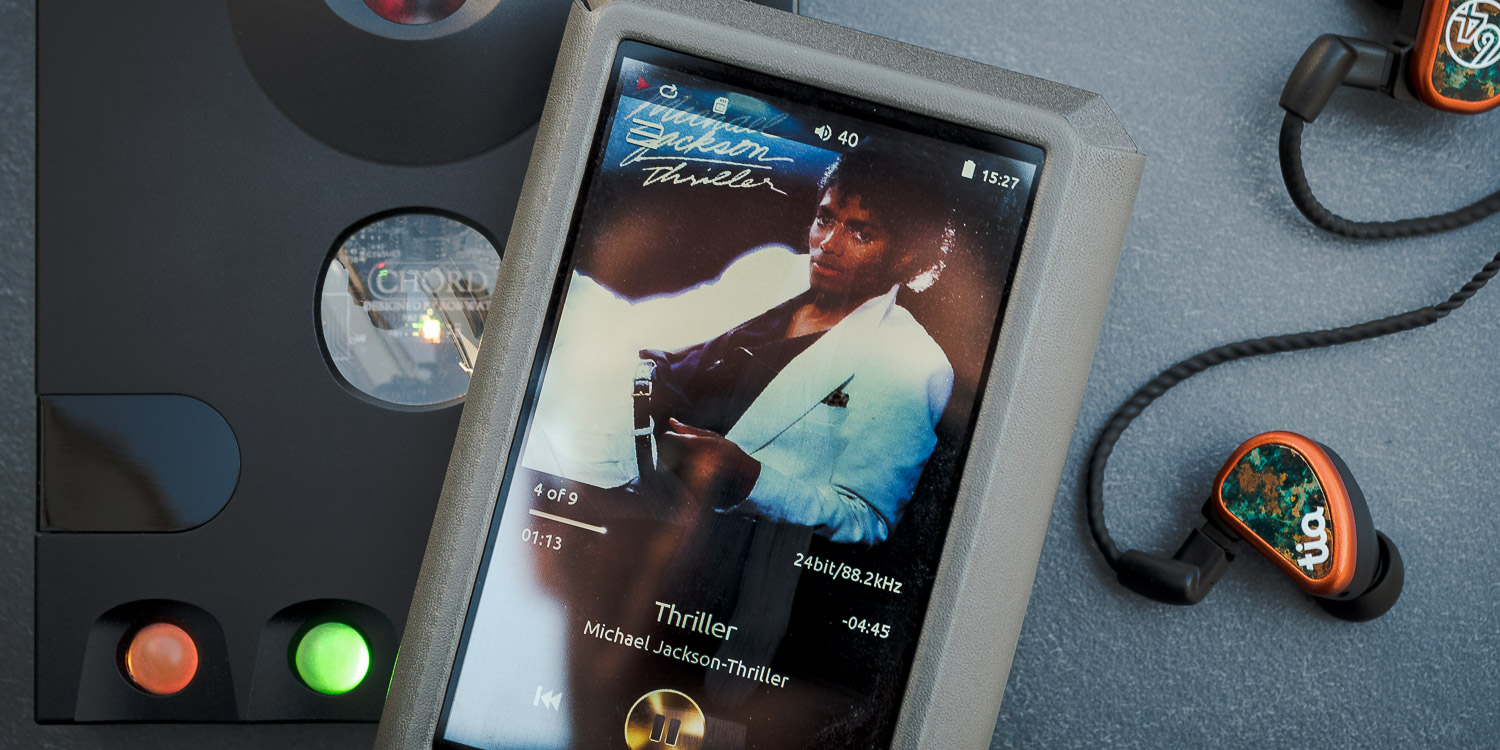 This article is a review of the 64 Audio tia Fourté with a focus on the music of Michael Jackson.

A lot has been said about the 64 Audio tia Fourté. Now that the limited run on the reworked Fourté Noir is over, I finally spent some time with the original version of the Fourté and I have to admit that I underestimated it. I feel like I have to share my fascination. But who would need the 50th review… almost three years late? I am sure everyone is well-informed about the build quality, comfort, accessories and the product’s history already. So here’s a different approach I have not done before. I am taking the tia Fourté on a journey through some of Michael Jackson’s tracks.

I have settled on the Final E-type ear tips which helped me achieve the flattest treble and also sit extremely comfortably in my ears. If you are interested in the raw frequency response, you’ll find it here. So let’s hit play and start the music!

Michael Jackson’s Thriller is one of the best albums ever created. The Mastering of the SACD is perfect. However, I’m actually not listening to the DSD but I converted the source down to 24-88.2 because there is too much noise above 44.1 kHz. Click here to find out more.

I can’t think of a better song to start this adventure off: When the doors open and the steps move flawlessly coherently from right to left, you know the tia Fourté are incredible for soundstage! The thunder and howling wolf sound like they are miles apart. There is no way any IEM could perform better in this case. And then the organ widens itself out over the whole frequency range – goose bumps before the show even starts. Fourté’s punch and rhythmicality must have been tuned and adjusted with this song in mind. Michael Jackson’s voice is as realistic as it can be. The IEM show no challenge with layering or depth whatsoever. It doesn’t get better than this! Definitely not with such body and resonance in the outro’s voice. Eargasm.

This track shows off the tia Fourté’s technical prowess. Speed and resolution definitely draw attention and create a great contrast to the full-bodied lows. M.J. takes a step back in the overall presentation, but the insane amount of air around every instrument and vocal won’t allow to count this as a negative. Instead, the focus keeps shifting back to the beat and the push and pull of the rhythm. This song with this IEM make my crotch itch and imitate the artist.

This record is actually not the full album. It’s a rare promotional CD that goes for around 200+ USD used. It contains some alternate versions and a few tracks from the full album. However, this release has higher dynamic range. Thank you to a friend who shared this with me.

Boy oh boy. When that rumble kicks in, you know you’re in for a treat! It’s definitely a bit overpowering, but the bass pressure is pulled back throughout the rest of the song which makes this a superbly compelling intro to set the mood; THX-style. Michael Jackson’s voice is perfectly separated and has convincing timbre. The tia Fourté expands into almost infinite depth. Before I forget to mention it, the hi-hats hit so transparent and clear that my throat aspires cold fountain water.

Man In the Mirror

You haven’t really heard this song until you played it on high-end audio equipment. The intro is a nightmare of a stress test! Those first notes seem to uncover distortion wherever possible. If you really want to split hairs, this is a good starting point. Amazingly, in this regard, the tia Fourté are possibly the cleanest sounding IEMs I have yet experienced. Add this to the completely bonkers crazy resolution of the maracas. Every single grain is audible and the Fourté acts as magnifier and x-ray at the same time. Yes, this is what being an audiophile is about! I want to say that at this point the tia Fourté are worth every penny of their MSRP.

I prefer the Japan CD release from Dangerous over the HD tracks. Ironically, the 24 bit release has less dynamic range and leaves no headroom. The production on this album has a v-shape by default.

What an amazing track. That low pace drive is genius. For me, this song is like the unofficial and darker follow-up to Billie Jean. Sadly, the tia Fourté don’t vibe too well with the mastering. The production team exaggerated a little bit in the low-end and the IEM’s strong punch steps into the realm of fatigue. Add this to noticeably recessed vocals and, unfortunately, this is one of the least enjoyable moments of the tia Fourté and Michael Jackson dream combo. This is a song that kills off most balanced and warm headphones, though, so 64 Audio is in good company. A small scrap of comfort.

Give In to Me

I have this song on my default audio test playlist. So this is a song I play with every IEM I get into my hands. But the reason is not because it’s a great song (which it is), but because of a recording error. An irregular cracking noise reappears throughout the song and I’m always interested to hear how well it’s uncovered. Unsurprisingly, the double tia-drivers lay it open like nearly no other IEM. That’s not to say the song is unenjoyable. In the contrary, the emotion of Jacko is well carried and portrayed. The song peaks with Slash’s guitar solo and the tia Fourté performs admirably. The guitar could hardly sound more electric. It’s edgy and crunchy without sounding harsh. The electric guitar goes straight through my audio chain into my body and raises my staticky neck hair. This is energy, this is passion, this is music.

There is always one genre, one artist, one record or at least one song in which an IEM performs best. But it is rare that one absolutely outperforms everything else in that regard. This, my friends, is considered high-end! The 64 Audio tia Fourté has outperformed anything I have yet experienced – multiple times! And most importantly, with one of my favorite artists.

I’m not going to lie. Likewise, there are some productions where I found that the tia Fourté creates hollowness in vocals or recesses the midrange too much. Also, as pictured by Who Is It, the bass can tend to boom. Occasionally, an s-sound can sound slightly too sharp too. Overall, I find the A18t less fatiguing and strictly more correct. But the tia Fourté knows that an extra pinch of salt and a little bit more heat can make a dish taste better. Not to mention that the double tia setup of the Fourté can actually showcase better resolution with some tracks.

But it’s not only with Michael Jackson, as described here, that the 64 Audio tia Fourté excels. It also reaches peak performance with many of my favorite Jazz albums. In terms of musicality and my personal preference, the tia Fourté easily aces out the Campfire Solaris, too. To conclude, in my opinion, the Fourté (including the Noir) has a strong and unique character that overall tends to emphasize on technicalities, but ultimately, manages to bring out the most joy I’ve yet experienced with many of my favorite music pieces. Highly recommended!