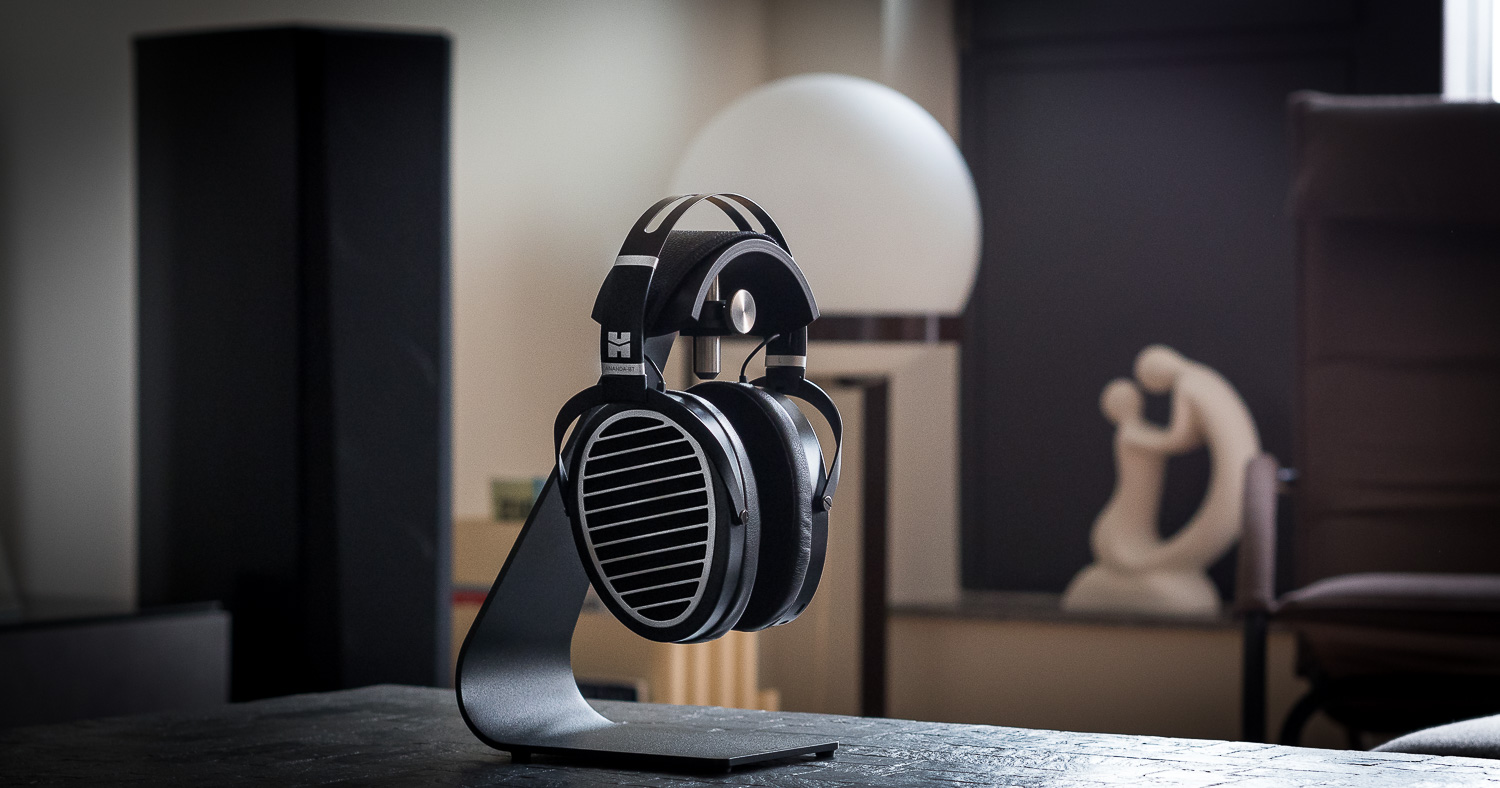 I have taken part in the Hifiman Ananda BT loaner tour on Head-Fi. Thank you very much to Hifiman for giving me the opportunity to test this high quality headphone and to share my impressions. The Ananda Bluetooth (BT) sells for around 1200 € here in Germany, which is a very high price for a bluetooth headphone. Is it worth the price?

Here is the original Head-Fi thread.

Hifiman is quite a solid constant in the high-end open headphone category by now. I actually remember the brand as Head-Direct when their RE0 IEM was a huge success on Head-Fi. For more than ten years the “new” HiFiMAN focusses mostly on planarmagnetic (orthodynamic) and electrostatic headphones. The team behind Dr. Fang Bian achieves phenomenal sound quality by making great use of their drivers. However, some would argue the company is known for heavily pushing prices into the upper realm but not always living up to the expectations in regards to build quality.

In 2018 Hifiman released the open magnetostatic Ananda headphone as a follow-up to the Edition X. The company is sort of like an open project that keeps improving on their products and shares every single milestone with a new headphone. By this release we were introduced to the Neo “supernano” diaphragm, which features a higher sensitivity. This allows the driver to reach high volumes from most sources, which is a great foundation for implementing Bluetooth. So here we are with the Ananda-BT, a logical step, right?

The packaging is pretty standard and fair enough. Nothing too fancy like a wooden case or anything; the headphones come straight forward in a cardboard box with some inside foam padding that does not exactly shout „premium“. I think I was second in line in the loaner tour, so somebody was using the headphones for a few weeks before me, but I still noticed a very strong chemical smell being trapped in the box. If I’m not mistaking, I uncovered the included carrying case to be the cause of the odour.

There is another issue with the protection case that comes with the headphones. The not so fitting cyber-tech design can be put down as subjective preference, however, it seems to be an average OEM case with a HiFiMAN branding. I unboxed the Ananda BT headphones completely discharged and quickly figured out why. The shape of the case does not really match the headphones. It is designed in a way that the power button is pressed against the inner wall, forcing the headphones to power on and off during transport. This choice really puzzles me and makes me think the company opted for a quick and lousy solution instead of considering the whole consumer experience by offering a complete design.

Holding the Hifiman Ananda in my hands, I did not immediately realize that you could extend the arms to adjust the headband width. I tried to do so, but the arms need so much pressure that I didn’t apply force until someone pointed this out on Head-Fi and encouraged me to do so. (Reports hint that not all Ananda BT headphones are built the same and that the rasterization might act differently.) I have a rather small head, but ironically the headphones fit more comfortably when I increase the headband size. Its design is quite awkward as it does not apply the pressure equally on the cups. If the arms aren’t extended, the cups only press against the upper half of the head, completely eliminating any kind of seal.

For Big Heads Only

The Ananda headphone design is clearly aims for big heads only. They’re equipped with huge cups that are bigger than a child’s head. I am not sure which ears Hifiman has encountered before, that they feared they would not fit under a normal headphone, thus making an extremely huge design. In all fairness, I assume the cups design is mostly in favor of the drivers’ size. Unfortunately this means that small heads with a distinctive jaw bone will have to try adjusting the headphone design with additional padding (e.g. add a Sennheiser headband cushion underneath the strap) to achieve a reliable seal.

Another weird choice by Hifiman is to make the Ananda-BT an all active headphone that does not have a passive mode. Do note that the company previously released the well-received original Ananda on which these are based on. There is no excuse in the world why the Ananda-BT would not include a passive mode as everything needed was already put into place. My best bet is that Hifiman does not want people to sell their original Ananda as it would be obsolete and thus might push customers to buy both headphones. Maybe my thoughts are unfair, but whatever the reason, this is bad design.

I am sorry to say that I cannot compare the Ananda BT with the original passive version. From what I read, they seem to be fairly similar at the very least – if not even identical. Obviously, the original version will have better potential to scale with a well-paired amp.

With the Ananda-BT you have basically two options to use them. From my experience, they sounded best via USB for which I paired them with my iMac. I did feel like the volume maxes out a bit too early for some users. Personally, I don’t like to listen at high volume but I can imagine that quite a high percentage of customers will be past their 60s and I doubt the Ananda-BT will offer enough headroom for high dynamic recordings.

The same limitation applies to Bluetooth. My paired device is an iPhone 11 Pro so unfortunately I can’t use the fancy codecs that are supposed to be close to lossless. Also, iOS is not transparent about when it uses AAC and when it prefers SBC. But I could tell a noticeable difference in a more congested soundstage and occasional artefacts. Still, I have to admit that the sound is crisp and top-notch, yet there is an obvious difference to when the headphones are hooked up via USB. Hifiman chose not to use pre-recorded voices for status updates but instead brings back very old-school beep sounds like your bios did in 1990. Fortunately, I cannot report any connection issues, though I did learn that if the battery is low, the headphones will connect but not playback audio.

Tuning wise, I perceive the active Ananda as mostly linear with the very characteristic Hifiman midrange. The sound is spacious and detailed with decent body.

The bass is very linear and reaches very low. The notes are thick and tight with a very realistic feeling. However, the fully open design lacks any kind of isolation and I had 40 Hz and below drowned out by even the lowest background noise which is an obvious negative that you have to deal with when choosing an open-back linear headphone. A small attenuation wouldn’t have hurt, like mildly added warmth. Higher volume would potentially help too, but – at least via bluetooth – this hurt the clean presentation and also the headroom felt too limited.

I have actually not written a detailed review on a Hifiman headphone before, though I have shared impressions several times in forums. For more references check out my review section.

I mentioned the characteristic midrange which I haven’t properly described yet. Hereby, I am at least referring to the HE-500 and HE-560, which I remember to have the 2 kHz recessed and instead boost the area around and above 3 kHz. This is definitely the case with the Ananda-BT, too. While voices sound fleshed out, this colorization creates a contrast to the details. It occasionally sounds as if nuances were separated and added on top of the music, receiving special attention and a splashy-forward presentation. I thus found Rock music to be not such a great choice for the Ananda BT – and sadly, I do not like it when headphones try to push me to listen to specific genres. On the other hand, Jazz and Classical music still sounded much better than I have ever heard from a bluetooth headphone, all afore-mentioned criticism considered.

Apart from the midrange creating a little bit of shout, the transition into the higher frequencies is superb. The treble is extremely detailed and soft at the same time. I have not found any peaks in the tuning at all, but weirdly so, the opposite. Performing sine sweeps, I found a very narrow notch at around 8,15 kHz. This is hardly worth mentioning because the dip is narrow enough to go unnoticed while music is playing, but I have not seen anyone mention this before with the original Ananda. It could be that Hifiman has hidden a notch filter in the active circuit to soften out the treble. I have not had enough time to further investigate, but it really doesn’t matter much.

Have I mentioned that the Ananda-BT sound very spacious? If so, please let me emphasize on that again. I believe this must be the most spacious sounding Bluetooth headphone yet – and that is even considering the limitations by an iPhone. The resolution and detail retrieval is just as amazing as the quick transients and fast decay. The overall sound is neutral enough to use the headphones for mixing and mastering. Personally, with the potential at hand, I would have wished for a very minor sub-bass compensational boost and a slightly less fatiguing upper midrange. I am sure the Ananda-BT could have achieved this with the help of DSP without losing much headroom.

Bluetooth as a go-to option?

Despite the Ananda-BT having incredible sound quality, I noticed that I prefer a lesser tier headphone, like the Sennheiser HD 660 S, as the go-to option. Though the Sennheiser sound more congested, slower and not as layered, they have more warmth and a more forgiving upper midrange. This harmonizes better with a broader scope of music. So even though the Bluetooth headphone should allure with ease of use, the functionality contradicts the sound design. With or without wireless gimmicks, I feel like the Ananda should be reserved for the special moments, consuming high resolution audio in a comfortable chair. In this scenario, I really would not mind the cable. In fact, having to check the battery status and remembering to use the separate charge button feels like taking a step backward instead of forward.

I have written a detailed review of the Sennheiser HD 660 S on Headflux.

All in all, the Hifiman Ananda-BT excel at where it matters most: sound quality. However, I feel like the overall product design needs more attention. Some decisions, like omitting a passive mode or adding a mediocre bulky travelling case, make the headphones a hard recommendation for the asking price. I am sure people would be willing to pay 100 € more if that would help to create a more complete package. More so, the bulky design does not really help with mobility at all. In conclusion, I think the Ananda headphones have top-tier sonics but the Bluetooth version is pretty much a very niche product. I recommend to check out the original Ananda instead.