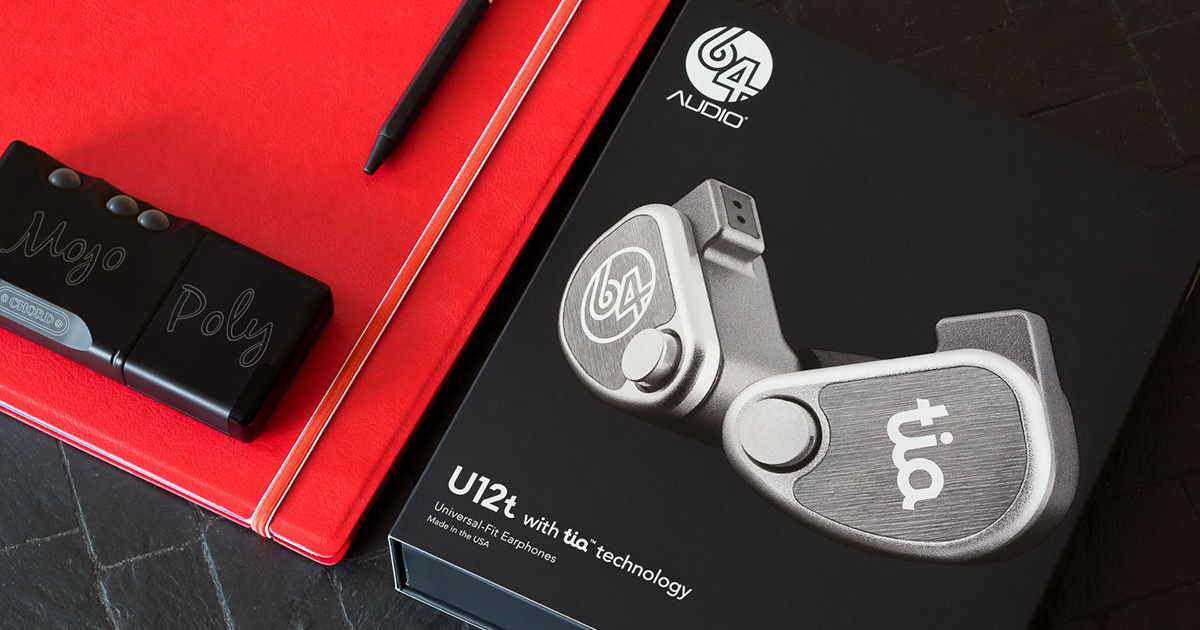 I currently have the chance to obtain a greatly discounted customized monitor from the genius manufacturers at 64 Audio in Vancouver, WA. Even though the price tag is still hefty and very hurtful to my monthly paycheck, there is no chance I could possibly let this chance slide. So I am comparing the U12t and U18t closely, as well as throwing in some comparisons with other gear. Might as well share my thoughts.

If you haven’t heard of 64 Audio, I suggest to look them up. I will not post a company history here. Just know that they were previously called 1964Ears and in a very short time they have become a big player in the pro and audiophile scene. Their monitors are superb! Also, Vitaliy is an awesome guy.

The CIEM monitors are actually called A12t and A18t, the U-version is exclusive to universal fit. Technically, A and U share the same setup and features. The CIEM should be very close to the experience of the universals with a deep fit and perfect seal. The effect of apex should be much greater in a custom-fit than with silicone and foam tips. I will definitely report back!

64’s previous flagship was the A12. It was only later replaced by the improved A12t with tia driver. The naming scheme of the A18 is even more confusing. There is only one 18 driver bomb, titled the Tzar. So A18, A18t and A18 Tzar are all the same.

I’ve had the chance to try both models before. I visited the 64 Audio headquarter in USA and was supporting their stand at CanJam London 19. The first time I tried the U12t, I couldn’t find a single flaw, which was the only thing I was looking for back then. I quickly described it as “flawless” and maybe moved on to the U18t too quickly. Anyway, I spent the following hours exclusively drooling over the U18t. It had a resolving treble like I’ve never experienced before that immediately had me hooked. Some fresh takes later, I am ready to share more detailed impressions.

The 12-driver model has a complex implementation of LID which makes sure all drivers are allocated the same amount of power from the amp. The 18-driver has known issues of most multi-driver designs when the source has an increased output impedance. Both models deserve a decent and dedicated headphone amp anyway, so this will less likely be an issue. But it is good to know you can plug in the U12t into most headphone outputs without worries, for example on the plane. Exchanging cables should result in more noticeable effects with the U18t.

Both monitors come with a full set of apex modules, e.g. both M15 and M20. They are supposed to isolate the surrounding noise by 15 and 20 dB respectively. This does impact the tuning a little bit. Based on my experience, (sub-)bass will be just a bit stronger with M20. Since this is a relative comparison, this won’t factor in too much, but you may keep in mind that I preferred to use the M15 apex module with both. M15 sounds more spacious and creates a wider sound, IMO.

Here you can find the measured difference of the two apex modules on the frequency response.

FYI, I have done a fair bit of tip rolling. I can’t manage to get a proper seal with the included silicone tips. I like the included foamies but sonically I have always preferred silicone so I am going for a third-party solution. Usually I go for wide bore tips, but here the nozzle is fairly narrow, so I am using the extremely comfortable Final E-tips for the majority of use in this case. I have also used my own hybrids built from Comply and SpinFit.

The 12 driver co-flagship has a healthy sub bass. However, the bottom/ground is kept flat. This makes vocals pop and come off as very neutral even though the presence area is slightly recessed. This does help greatly to dodge any fatigue. The treble is smooth and well-tuned with superb extension. Overall the U12t fits well into the neutral category, though among the reference tunings it can be described as mildly warm.

Compared to the U12t, the U18t is more balanced with a more prominent treble. However, the bass is more widely boosted to create the necessary warmth to not come off as bright. The v-shape signature is quite delicate and the tuning can easily be mistaken with reference neutrality. There is a lot of audio information pushed to the front when compared to the more laid-back U12t, yet the soundstage increases even more in depth and width. Though the signature is indeed different to the U12t, the U18t also falls into the neutral category.

Overall, the U12t will have a slightly stronger focus on bass than the U18t as the low-end tuning is more prominent in the grand picture. But it is extremely musical and fun to listen to. The separation to the midrange is better pronounced and perhaps follows the Harman target more closely. Thanks to the bass‘ precision of the U18t, the term “bleed” is very misleading. Technically, however, the U18t’s bass bleeds oh so slighlty into the midrange.

The bass is very tight and precise with both models. Everything else would be extremely embarrassing, as they dedicate 4 and 8 BA drivers to the lows only. The reason is to reduce any distortion that a single driver could produce at its limit. Sometimes people complain about distortion at high levels and lack of sub-bass pressure for IEMs that sound absolutely fine to me. I usually don’t go to the extremes, so I have handed the U12t to the pickiest friend I have who adds +6 dB sub-bass by default to every earphone and turns the volume all the way up. Almost every IEM fails his test. He was very impressed, though, so I know the U12t passes the toughest quality control. To my ears, the U18t sounds even tighter, which might be because of a stronger presence of mid and upper bass – or perhaps it’s because of the doubled driver count. Either way, I am sure both will provide more headroom than most people will ever need.

The basic tuning is overall very similar but the U18t has a hint of coloration in the lower and upper mids, whereas the U12t sounds more like a reference tuning. The U18t goes absolutely bonkers with resolution, though, and pulls doubled vocals completely apart and allows a whole new level of monitoring accuracy for microdetails. In no way is the 12 lacking resolution, but the 18 just pulls information out of nowhere that I have never received from any other IEM ever. The U12t does sound more natural, organic and fluid. Both models set a benchmark in their own regard.

On paper, both share the same configuration for the treble with a single high-mid BA receiver and the proprietary tia driver for the top-end. Both boast insane extension, amazing clarity, quick decay and enjoyable sparkle. The treble is brighter and a bit more forward with the U18t which can cause some fatigue, even though there is no sibilance. Again, the U12t sounds more realistic and is more cautious with shoving details into your face. The U18t, however, is a showcase for the tia driver and the airy presentation it creates. I have not found a track in which the 12 driver was missing anything compared to the 18.

The U12t has more distance to the listener than the U18t. The Tzar can become more intimate with bass and treble and still manages to create a better layered and deeper soundstage. Both have great width. One thing I noticed, though, is that all the precision and detailing of the U18t can sound less lifelike than the 12t. The ’smaller flagship’ sculpts more plastic and realistic sounding instruments. This is more noticeable with average recordings and holds less truth when listening to reference audio tracks.

If you want to read more, here is a comparison of U12t and U18t to the Fourté Noir.

Oh wow. What a few amazing past days. I have really enjoyed comparing these two high-end IEMs. Both belong to the best I’ve heard so far. I do not have much experience with supercars, but I imagine comparing a Porsche to a Ferrari would be similar. Both are absolute overkill and have better performance than one needs. It will be extremely rare to push either to its limits in normal use, but knowing the headroom is there, is part of the experience. One of the two fairs better in everyday use and that’s the U12t. Going to the absolute extreme and trying to push limits will give the U18t the edge.

Which one do I prefer? I haven’t finalized my decision just yet.